He sat there, waiting. He peered into his bag sat next to him, as he took out a single white rose and a photo in a dark, wooden photo frame. He laid the rose on his lap and set the photograph on his knee behind the rose. He looked at it, stroked the right side of glass pane, through which I could not see the photo because of the reflection, with his right thumb and stored the frame carefully with fluid, calm and controlled motions back into his bag. 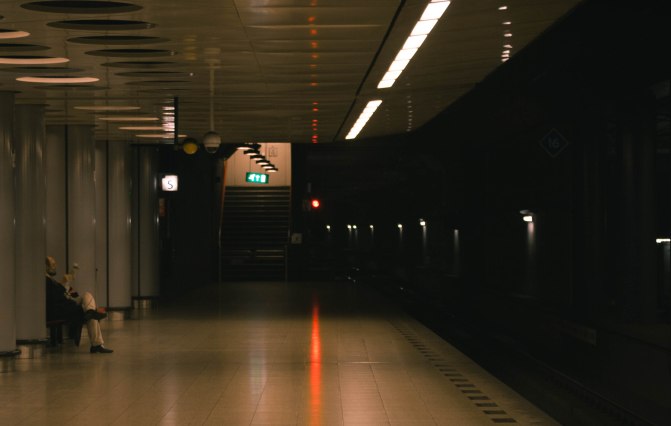 He collected the beautiful, thornless rose from his lap and examined it lovingly, looking from at the rose past each immaculate, silky soft, white petal from the outside most petal to end up with his eyes lined up with the heart of the rose, as a man would gaze at a beautiful woman from her toes to the top to end up looking into her beautiful eyes, getting lost in the awe of her glance getting lost in time, and such as that he looked at the eye of the white rose with love. He put the deep green stem of the rose in his bag, flower sticking out and grabbed his newspaper sat on his other side and read it carefully with calm, soothing eyes, his face the whole time emitting a sincere peacefulness which made even the most hurried of commuters in the train station stop for a second to have a look at the man, and have their faces sag down into a calm, relaxed expression with the smallest, content smile painting their faces.

Behind me, when I quickly shot this photo with my Canon camera, the station was crowded with people waiting for the next train, whilst where this entity of calmness was sat alone on a metal 3-person bench. No one came near, as the tranquillity surrounding the man was almost sanctified. Looking at the picture later, not knowing who this man was or where he was going, yet feeling the sense of serenity come over me still soothes me, always. In a train station busy as can be, a sanctuary of security and stillness was. While I got in the train, the man looked at me with glad, shimmering eyes and nodded confidence-inspiringly, then looked with a smooth turn of the head back into his newspaper where his eyes were lost in the words he was reading once again.

Story inspired by my photo taken at Schiphol Airport with my Canon 350D.

2 thoughts on “A sanctuary of tranquillity”